Revenge recap: The Last 5 Words of This Recap will BLOW YOUR MIND 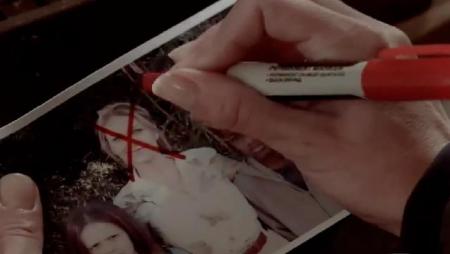 Even the return of the red sharpie couldn’t save this stinker of an episode.

JUST KIDDING!  Remember how they told us in the promo last week that the last 5 minutes of this episode would be a TOTAL GAME CHANGER?  Surprise!  It wasn’t.  Turns out the big “game changer” was just that there’s another Grayson kid running around somewhere.  Whoop-de-freaking-doo.  Join us as we try to make it interesting.  And then stick around for the last 5 words that will BLOW YOUR MI.. it will just end.  It’s not a big deal.  Unless it is!  Have you scrolled down yet?  Don’t be mad.  We tried to warn you.

Susan: Were you bummed about the “explosive last 5 minutes”?  I felt like we already knew that.  I fail to see how it’s a game changer.

Steven: I was pretty bummed.  When Mason talked about Victoria’s baby I thought it was the beginning of the reveal.  Like “blah blah baby. Blah blah, and his name is Eli James!”  Dun Dun Dun!!  But no, it’s just that she has another son.  Unless the adopted kid is someone else who’s already on the show, I’m not really impressed.  Could it be Nolan?  We don’t really know too much about his family, do we?  Or he might not even know that he was adopted?  Maybe?  I just don’t want another new character, especially if he turns out to be lame sauce like 1/2 to 2/3 of the new characters turn out to be.  (Remember how earth shattering Emily’s mom turned out to be?  So earth shattering that they just pushed her away from the Hamptons like an elderly person in Alaska and let her float farther and farther away from the plot…….. that super-ellipsis is her growing ever less relevant.)

What’s up with this Padma deal?  Is her papa going to turn out to be the Falcon, or is he just a terribly father?  “Hey sweetie, come alone to this dark alley to meet these nice men who’ve been torturing me.  Oh, also do whatever it takes to steal a crazy dangerous program that will kill a bunch of people and leave you guilt-ridden for the rest of your life.”  Father of the year, hands down.

Susan: Surely it can’t be someone who’s already on the show.  They already did that with Charlotte.  I think it would be too much of a stretch, even in this family.  I do wonder about Nolan’s family though.  Is it possible that he’s related to the Falcon?  That would be kind of cool and twisty.  I’m also a little bummed that Eli is leaving so soon.  He had an opportunity to make quite a bit of money off Emily and the Graysons, but instead he just wanted to ruin their foster mother and get Emily a letter?  Feels like a swing and a miss. Unfortunately, I don’t have much faith in this new Grayson family member plot.  Sigh.  And things were going so well!

The Padma situation is such a mess.  I don’t believe that Nolan and Padma care about each other, because they’ve only spent 2 scenes this whole season actually being “in love.”  Add to that Aiden’s complete ineptitude with the Initiative and it was clear that this was just an easy way to ditch some characters who weren’t working.  Did Nolan really think his bizarro turtle flash drive would work?  How about not putting the tracking device in the removable head?  Ugh.  Dumb, dumb, dumb.  I hate that the normally smart characters have to act so dumb to keep the Initiative out of reach.  At least now maybe we’ll see what Carrion can do.  I’m ready for some serious destruction.

Steven: I am also semi-furious at how dumb each and every person involved had to be during this whole Padma deal.  For one, the dad.  Once again, don’t rope your children into your terrible decisions.  For two, Aiden.  Have a back-up plan, buddy!  For three, Nolan.  Ever hear of putting a tracking device in the actual program, and not just in the disposable turtle’s head?  And what’re you doing handing over the real Carrion anyway?  I find it hard to believe he’d part with what amounts to a nuclear bomb in order to potentially get his girlfriend’s dad back.  Also, what kind of security is two guys on a roof with one gun twenty yards away?  Back-up plan!!  And then finally, there’s Padma.  You should know better than to just hand over the ransom before seeing the hostage.  That’s negotiator basics.  Nolan and Aiden and you should’ve known that, Padma!  I love to suspend my disbelief when Emily and Aiden are studying kung fu and breaking out of air conditioner vents, but not when really bright people are making really dumb decisions just to make the enemy seem more menacing.  Now I feel like the way for Emily to beat the Initiative is to just avoid huffing paint the few hours before meeting with them.

Susan: What do you suppose the deal was with Padma having to make that video?  Are they trying to get Nolan now?  I’m going to take this idea of the Falcon as Nolan’s father and run with it.

Steven: Padma, Padma–more like Padsy!  I think this is going to be a Brody-esque video in which she takes the fall for whatever the Initiative has planned.  And you know, more power to ’em.  If these folks are willing to just go along with all of this evil, then maybe they should suffer terrible fates.  I can deal with Nolan and Padma being fake in love with each other, and I can deal with neither of them really committing to their love scenes, but I do not like this idea of everybody being a victim.  You don’t have to help them, folks!

I know, I know, I can say this from my comfy pillow fort in front of the TV.  If some KGB type group captured me and tortured me, I’m sure I’d break.  But that’s why I didn’t become a nuclear engineer.  If some Russian/Saudi wants to know how to conjugate in the future perfect progressive–I’ll give him one free lesson.  (Or should I say, I will have been giving him one free lesson.  You’re welcome, Alexei Terroravich.)

Susan: Whoa.  That got nerdy fast.  Let’s end on a positive note, shall we?  I was very thankful that they gave us the origin story of Emily’s red sharpie.  Everything else… eh.

Next week: masks!  And a new character?  More Initiative business?  Will Jack finally wise up?  Tune in or tune out, either way, we’ll still be here.  Revenge!